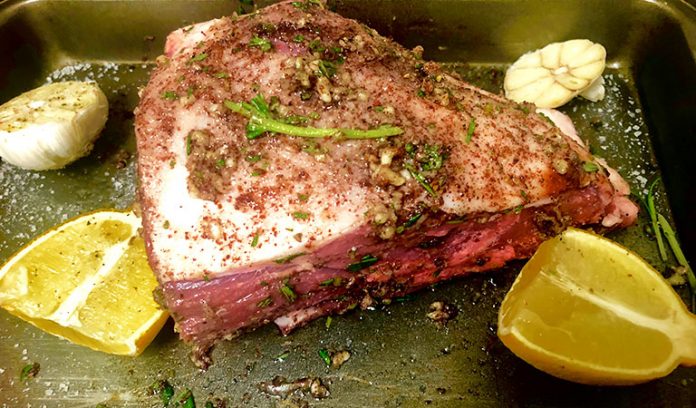 As always, I wanted something a little different for My Sunday, traditional but with a twist. Usually, every time I have lamb, I simply make insertions into the meat and then stud it with garlic and rosemary. This time I decided that I was going to crank the flavor notch up a little.

I wanted something to be lip-smackingly tasty as I have had a flu for a couple of weeks and I wanted something to tingle those taste buds again. So, I wanted big bold flavors and was eager to try some easy lamb recipes, one of them being lamb with sumac garlic and rosemary, roasted root vegetables, lemons served on a bed of pureed celeriac.

After leafing through some cookbooks and a few websites, I had a flash of inspiration. I would go for some Middle Eastern flavors and the top of my list was Sumac. I used sumac recipes several times for lamb cooking and once I was lucky enough to get an authentic recipe from one of my work colleagues. Luckily, his mum still lived out there and he was able to translate the recipe for me. But I digress that’s another story.

Lamb with Sumac Garlic and Rosemary 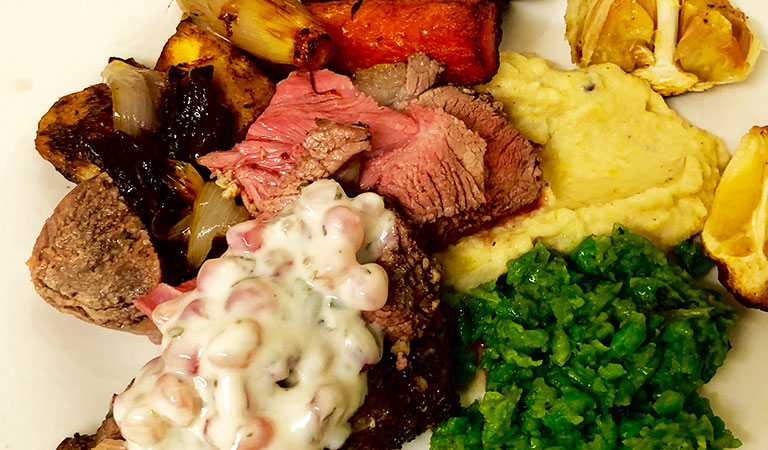 This was not widely known or used within this country until a few years ago and you could only buy it from specialist shops. However, most supermarkets now stock this middle eastern spice. Sumac is grown on bushes and ads a tarty lemon flavor.

I grated 3 large garlic bulbs as I wanted this to be full of flavor and then chopped a few sprigs of garlic from the garden. Then I added the sumac and a little olive oil and mixed it all together and smothered the lamb in this paste and left it marinating for around two hours (40 minutes would suffice)

I have never been in love with beetroot my entire life, that was until I decided to roast it one day. The earthy flavors that beetroot brought to the dish were so comforting that it has become a must-have for big flavors. There are so many ways you can roast the beetroot but I mostly just top and tail and peel off the skin and put it into a roasting tray with a glug of olive oil, salt and a sprig of thyme. It works every time, roasting for around 45 to 60 minutes and you have wonderful earthy flavors on a plate. 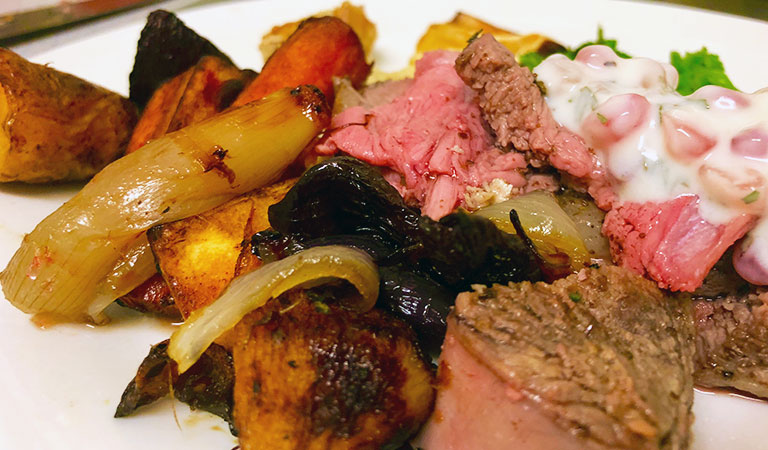 Once upon a time garlic was that foreign species that the culinary foodies back in the day dared to put a little into a spaghetti bolognaise to be suave. Not too much garlic as you didn’t want your breath smelling too much at the office the next day. Step forward to today and garlic is thrown into nearly everything just to bump up the flavor, whether you’re cooking mouth-watering smoked ribs or juicy patties or pork butt with your smoker. When roasted garlic takes on an entirely different flavor. The raw garlic flavor disappears to be replaced with a mild, sweet garlic taste. Simply cut a garlic bulb in half, drizzle over olive oil and salt. Once cooked squeeze out the garlic bulb flesh for a taste sensation.

I’ve never had it before and it was a last-minute addition. But now I am left wondering why I haven’t done this before! I just quartered a lemon and placed on a roasting tray for 30 minutes. The results where tremendous! The edges had gone slightly caramelized and when you scraped the flesh off from the peel, wow is all I can say. Try some and I can assure you that you will do it again and again.

I have only just recently discovered the delights of this earthy flavor. When I buy one as they are often quite large and more than enough for two people I cube the rest and pop it into the freezer to use later. I usually roast celeriac but as I was roasting quite a few other vegetables one time, I decided to change the texture of this and puree it. The taste was wonderful enough to be added to many dishes. I like to make a gratin with turnip, celeriac, garlic cream, and butter every once in a while. 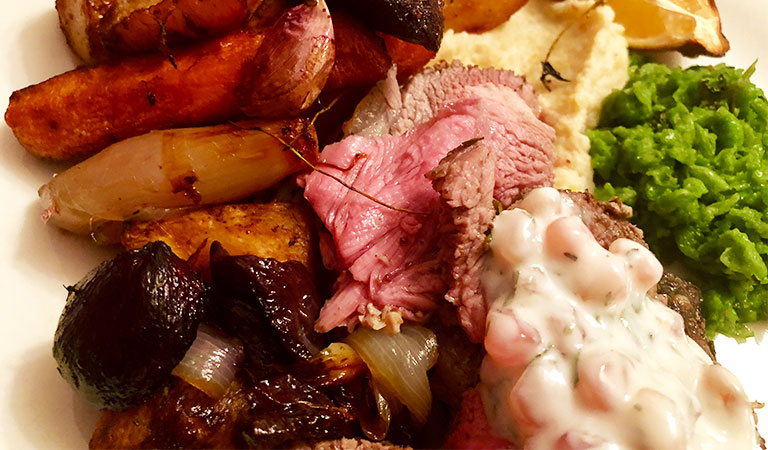 Keeping with the theme of big flavors that you deserve from different delicious lamb dishes, I decided to make a sauce from yogurt and horseradish. Next, for texture, I added pomegranate which brought sweetness to the fiery horseradish and then for balance I added tarragon, lemon juice, and sugar. 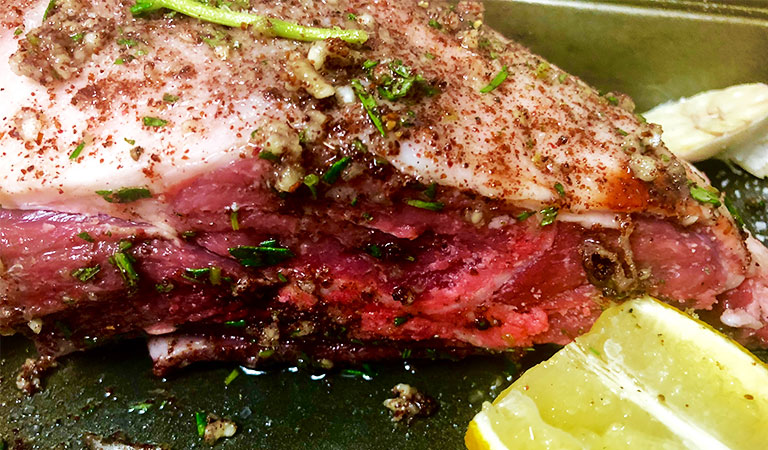 Make a paste from 3 cloves of garlic, rosemary, the sumac, and oil. Coat the lamb and allow it to marinate.

Gently poach cubed pieces of celeriac in milk until they become tender and cooked. Once cooked, blend them up and add a little of the poaching liquid and some butter (season well) until they have a nice, smooth consistency. Once this is done add them to a small pan and reheat just before serving.

Here is the final step to cooking lamb. Squeeze the juice from a quarter of the lemon on to the tarragon in a small jug. Now add the yogurt and horseradish. Mix well and add a little sugar to balance (add sugar to taste). Now add the pomegranate seeds and pop into the fridge so the tastes merge. Add the rest of the lemon quarter to the roasting tray with the lamb. Don’t forget to put your garlic on the roasting tray as well.

Cut all the root vegetables into similar pieces – carrots, beetroots, red onions, shallots, turnips and 4 bulbs of garlic. Then add them to a cast iron pan with a splash of olive oil and season. Brown all the vegetables in the pan and once they are at that stage, add the thyme and pop into the oven for around 45 minutes. Don’t forget to add the lamb at the same time (if you have a larger piece of lamb this will need to go in earlier). 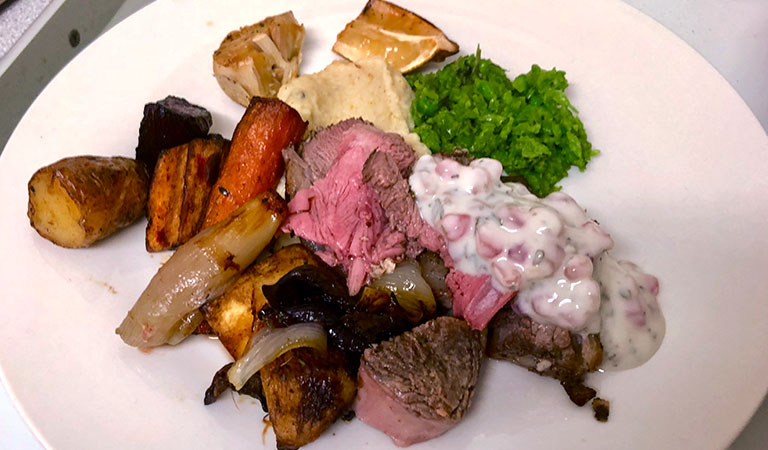 Now add the peas to a small dish with some butter and place some cling film on top. Then microwave for 1 min 30 seconds. Remove from dish and add to a blender with the mint, season well and add more butter. Once done, add the mixture to a small pan and reheat later.

Take the lamb out of the oven (I like mine pink). Allow it to rest and at this point, start warming up your peas and pureed celeriac. Warm the plates as well. Once the meat is rested, carve and then add to your plate with other ingredients. Add as much or as little of the sauce as desired. Now enjoy your lamb with garlic sauce and rosemary to the fullest!

Enjoy Sumptuous Barbecue and Grilled Dishes in the Comfort of Your...

How to Smoke Trout in 9 Simple Steps?