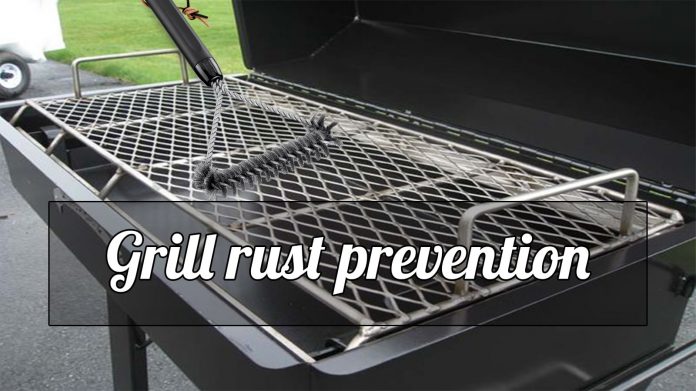 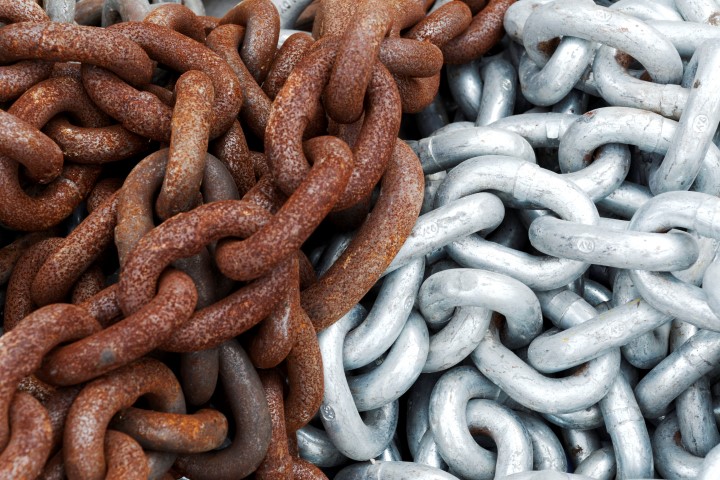 Rusting is a common occurrence on metallic objects, particularly those left outside. Some high quality grills are immune to rust to some extent, however without proper care they might get rusty as well. The biggest effect of grill rust is its corrosive effect on metal. To understand the actual physical and chemical reactions at play, it’s important to first understand the interplay between iron and oxygen. Rust is predominantly formed through the oxidation of iron- forming a compound known as Iron Oxide, which is essentially the chemical name for rust. Technically speaking, the three elements interacting in rust formation are iron, oxygen, and water- the presence of these 3 is always a recipe for disaster in terms of rusting.

The environment of the rusting item is an important factor in determining the severity and speed of rusting- a greater presence of water, iron, and oxygen produces a greater effect in terms of rusting. Combine the presence of these elements with other mitigating factors, such as humidity, temperature, precipitation, salt water (if located near the ocean) and other naturally occurring influences specific to location, and you can see the rusting process become catalyzed.  Rust usually is identified by it’s brownish, deep red tinge created across the object, bringing into question both its aesthetic value and effective functionality. In this article, we will be talking about the best way to remove rust from your grill and keep it clean.

Rusting can be compiled into several different categories as well. There is the rusting of metallic infrastructure, which of course can be dangerous if not treated and protected against. As a component of iron, steel is another element that is susceptible to rust and is vulnerable to the spread of rust through proximity to another rust carrying metal. Again, iron oxide is the culprit here. Further rust can occur in tighter quarters, such as the inner mechanisms of structures. The micro-environment comprising a nut and a bolt is often prone to rusting under certain conditions, and again as a structural factor care must be taken in eliminating and protecting against rust.

Why Does a Stainless Steel Grill/Cast Iron Steel Rust? 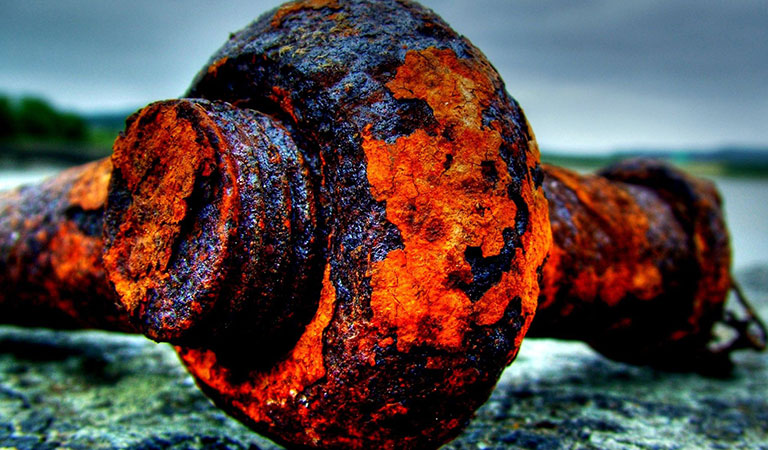 No matter the grill type, to many people, having a stainless steel grill means that the grill is impervious to rust. The element which is used to protect from ‘stains’ in stainless steel is chromium. However, if a disconnect forms whereby the surface is not closely alloyed to the chromium, then grill rust can become an issue. Generally, this is usually the result of contact with other rust bearing metals, which pervade the surface of the stainless steel and infect it with rust. Iron is the biggest culprit again, becoming transferred from the other metal to the stainless steel, and combining with water and oxygen to form rust. This is generally most inconvenient due to the unwanted aesthetic appearance which forms. While the inner chromium generally controls the spread to a mere surface problem, it is still an unwanted hassle to have rust form on stainless steel.

Cast iron, on the other hand, can be very resistant to rust if kept in the perfect conditions, but not taking care of the cast iron can cause extremely fast rusting, unfortunately. This is generally a result of the aforementioned factors. Leaving it in a moist environment for too long (i.e. longer than a quick wash and dry after use) is often a big reason for cast iron rust. Additionally, cast iron is very vulnerable to changes in humidity which can cause rapid rusting. So the biggest thing to remember with cast iron is that with proper care, they can be fantastic. But leaving them to the influence of the elements is a sure fire way to cause rapid rusting, which might be detrimental to your healthy grilling efforts. 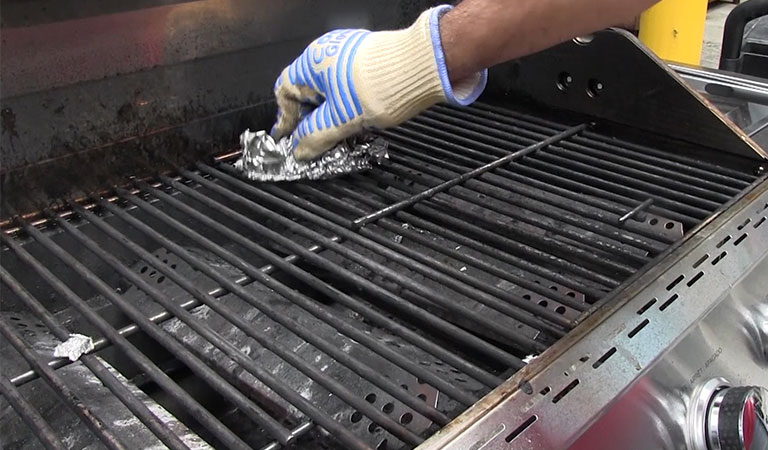 With stainless steel grills, it is highly recommended that you treat them with care and consideration. This means do not attempt to clean the surface with tough, rough, metallic cleaning tools, such as wire/steel wool. Use a light, softer sponge instead. In terms of creating a cleaning detergent, baking soda can be an effective addition to water, and using this as a detergent is the most effective way to cleanly and safely remove grill rust from stainless steel.

Due to the physical properties of cast iron, it requires a firmer, stronger approach to cleaning. Comparatively speaking, cast iron is amenable to tougher cleaning products, such as wire or steel wool. In terms of creating a cleaning mixture, think about mixing kosher salt with water instead of baking soda. This is better at breaking down the rust on cast iron, and a tougher approach often works wonders. 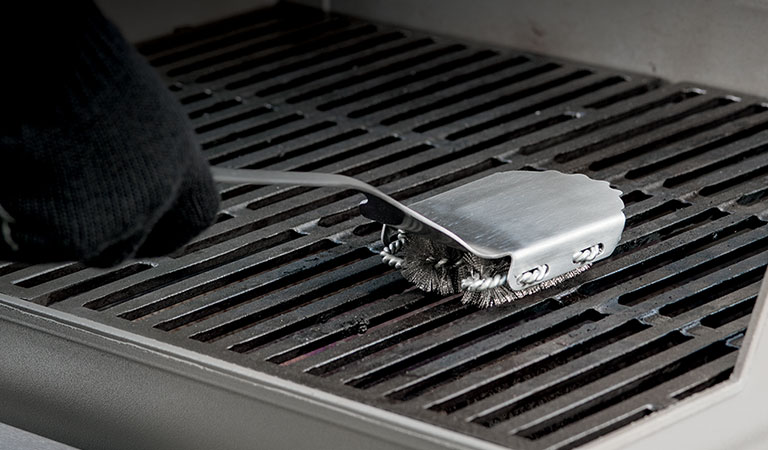 A charcoal grill, like many grills, requires baking soda as the main ingredient. However, it is wise to clean this by hand rather than using the heat of the barbecue, so a few dashes of vinegar can provide a stronger cleaning agent to get the job done. Once the agent has settled for approximately 30 minutes on the rust afflicted area, then simply wipe away with warm water.

Follow directions shown for a charcoal grill- the results will be the same.

Like the charcoal grill, wood pellet grills should be managed with care. But if they do develop rust, apply the baking soda and turn on the heat. This should adequately remove the grill rust from the affected areas.

How to Clean a Smoker Without Chemicals? 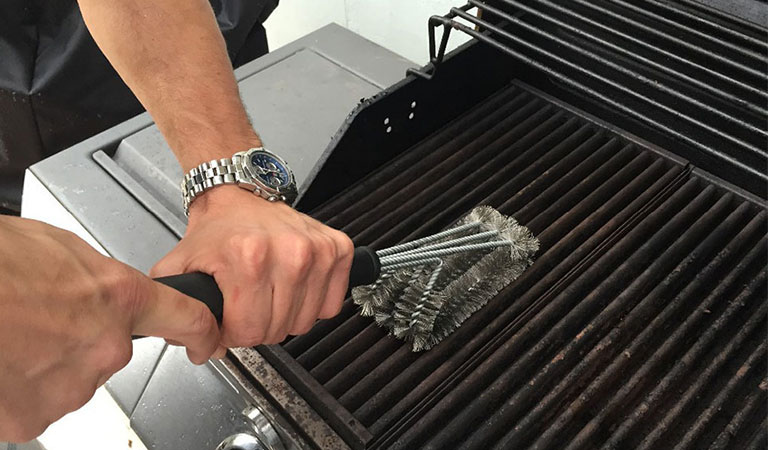 Using a smoker can be one of the best ways to have those summer barbeques we crave in the winter months, but it is easy for them to quickly and vociferously accumulate grease and other elements which must be cleaned. Grates can be an awkward item to clean at the best of times, so removal of the grate from the rest of the machine is vital to the process. Soaking the grate is the best option, combining baking soda and vinegar before submerging the grate in the sink (often with some sort of weight to retain the submerged state. Within 30-40 minutes, you can remove the grate and wipe with aluminum foil, removing excess rust material and leaving just a final water wipe and dry to return the grate to clean functioning.

So follow these simple steps to keeping your grill safe from rusting and enjoy delicious grilled foods for years to come. Also see other blogs here at Grills Forever to make the most of your grill!

Is There Any Health Benefits of Grilling Food? The Answer is Here!!

How to Use an Electric Smoker: A Step by Step Guide

How to Set Up a Charcoal Grill for Smoking Just in...