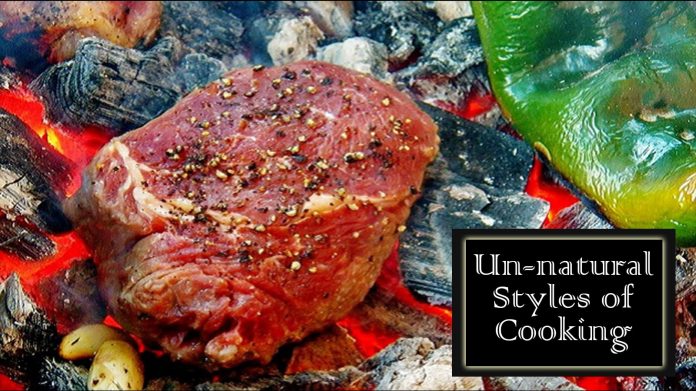 One can think of extreme grilling of steak only after he/she becomes confident and good at simple grilling of steaks. If you know how to efficiently grill various steaks like; New York steak, others like flank strips and have tried grilling on ceremonies, celebrations or other occasions. If you have done other relevant tasks in grilling, too you are ready for this new level of grilling styles of cooking. In this blog on Grills Forever, we will discuss various techniques and ways of grilling which are rare and uncommon.

By extreme or uncommon grilling, what is meant is real unnatural procedures like grilling by using various tools like shovel or pitchfork. Or use some suitable green leaves and branches to grill like grilling on spruce stems and branches, grilling the steak by wrapping it in hay that is some dried grass. Other ways like salt crusted grilling in a cloth and using ember to grill directly. We could have gone even further like testing to grill over a volcano or some wildfire but due to some obvious reasons we are not considering that.

Extreme grilling is interesting because it pushes you over the limits to use your brain and come up with ideas for ways to grill other than traditional methods. The main point is that it makes you leave your comfort zone and the excitement and curiosity adds to the flavor and texture which otherwise is difficult to get. Moreover, the feeling to grill without appliances and even without a grilling gauge is mesmerizing. Let’s discuss six ways or themes in order to produce some memorable steaks.

It is believed that about 2 million years ago a human known as homo erectus was the first one to cook one’s own food. In old times cooking would mean grilling on embers when people used to live in caves. They used to use barbeque technique for steaks like T-bones, etc. When steaks are grilled directly on embers there is a smoky flavor and charring of surface which one cannot bring using other conventional methods of grilling. Not only that, in addition to the said texture if one uses garlic, cilantro and jalapenos there will be another dimension added to the taste of steak.

Grilling while covering the steak with hay

There may be a number of reasons to wrap steak pieces with hay. To some people, charcoal aroma inhaling may feel good and it also adds to the eccentricity to the artists who practice making it. There are some masters of hay grilling who wrap the steak into hay and grill is seared. The beauty comes next when that hay catches fire and leaves the beautiful shapes with smoky texture and flavor. This dish is so incredible to test for its versatility and making. The recipe is simple with few gallons of hay, a few bottles of beer, some strip steaks, some basic ingredients, one-fourth cup molasses, half a cup herbs and some olive oil. With this much ingredients, you are ready to roll.

Salt crusted grilling in a cloth 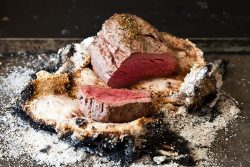 This was first used and started by masters of grilling of Columbia. They found a way to provide steaks an expensive finish and maintaining tenderloin taste and the drama associated with it. What they basically did is they wrapped tenderloin beef in a cotton piece of cloth with salt packed in it and roast it in embers. This dish is ready in very less time with one of the most delicious grilled steaks one has ever tasted. This is a good example of creativity and enthusiasm for grilling lovers.

Grilled over branches of spruce

It is generally recommended to not use any resinous woods like pine on fire. But this rule cease to exist when it comes to grilling out of the box. However, you don’t use spruce throughout the process but only to add special texture at nearly the completion of cooking that is grilling. You start with the regular way to grill and then put your steaks over some laid spruce branches in almost cooked condition in order to add some spruce perfumes by adding its oil to steak. This way the flavor achieved is at peak and worthy of your effort. 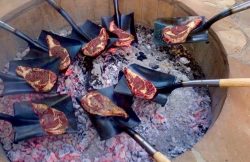 This method is the outcome of the technique that was used by a number of generations of Australians who lived in bushes. They used to grill the meat steaks and other traditional kinds of meat by placing it on a shovel and putting it over an open fire outside the camp. The meat is seasoned by a number of ingredients like pepper, salt, rosemary, garlic and settings of outdoor picturesque. However, you should know how to season a steak well.

Grilling on a pitchfork 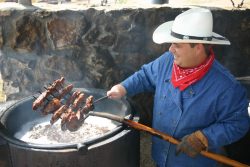 North Dakota is not very famous for foods but it has one good reason for you to check its pitchfork steak. During summer there is a crew of some chefs who quite efficiently impale the rib-eye on pitchforks and put them in oil scalding in kettles of huge sizes and give it a cowboy texture. They then cook it on a pitchfork on an open fire.

Extreme methods of grilling aren’t limited to these 6 but one can use his/her own creativity and come up with some interesting ways to grill meat steaks and earn some fame in grill mastery.

Occasions Can be More Delightful by Smoked Foods: Get a Smoker...