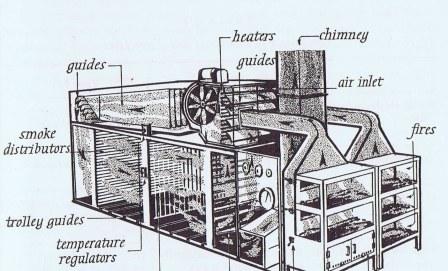 Smoking meat means exactly what you understand by the name- adding flavor to the meat by the use of smoke. This can be achieved by using any device, provided the smoke comes into contact with the surface of the meat. Smoking meats is not a new thing- in fact, technology for the same has been around for well over a hundred years. However, the most significant revolution, one that gave us the modern way to smoke meat, is the Torry Kiln Smokehouse, invented in 1939.

The Torry Kiln Smokehouse is named after the Research Center Torry at Aberdeen in Scotland, where it was designed for the 1st time in 1939. Ever since then, the Tory Kiln Smokehouse has single-handedly brought a revolution in the industry of fishing. It was the first smokehouse that made it possible to have a great degree of control over the several smoking parameters, including the speed, air temperature as well as the humidity. This allowed for obtaining finished products with consistently higher quality.

The most significant achievement that the Torry Kiln Smokehouse has was the control over air draft. Air draft is considered as the sucking power of the smokehouse, for it is what sucks tee air outside and the gases of combustion, which consequently attract the solid and unburned articles, like ash and soot among others. Along with a higher temperature, a stronger air draft helps increase the smoke’s energy, which is required to give a more intense smoky flavor.

The moisture that is present on the surface of the meat is what provides the right color to the meat since color formation happens faster on a wetter surface. The color also gets darker with more moisture for it allows soot and tar to stick to the meat’s surface.

Earlier, the smokehouses that were made had to depend on the air going up naturally without any form of control over the humidity, referred to as draft control. The Torry Kiln Smokehouse was the first one to incorporate into its design a motor-powered fan, temperature sensors, electric heaters, photo-electric eye as well as air diffusers that allowed for smoke density control. It is rightly known as the foundation of all modern smokehouses that we use today. It was the 1st device that made use of an independent mechanism to control the temperature and draft.

Thus, the next time you eat a well-smoked meat, you will know that the technology of a Torry Kiln Smokehouse, particularly the control over the air draft and moisture, are what helped to make it so delicious. 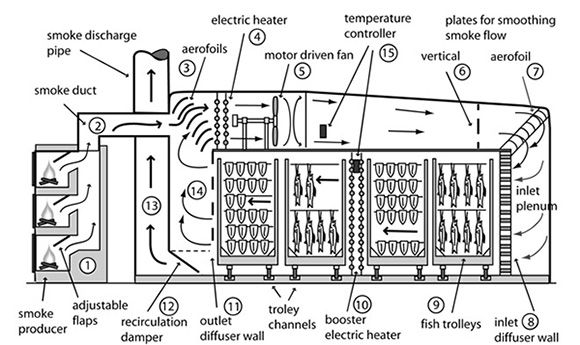 Prior to 1939, smoking was more of a heavy-duty task. It involved using large quantities of salt while curing, and at times, smoking times would be for days at a stretch. This was all when the main aim of smoking foods was preservation. Partly due to modern transportation, the need for preserving food for such a long time decreased, and technology improved. With the invention of the Torry Kiln Smokehouse, smoking foods completely moved away from a method of preservation to a way of flavoring your favorite food.

The smokehouse made it possible to mass-smoke meats and get uniform results. Majority of the large-scale commercial smokehouses used today are still modeled after the original Torry Kiln design.

The Torry Kiln Smokehouse came with a number of advantages- it took up considerably less space, did not let the unburnt particles to reach the hanging fish, controlling the various parameters was precise and so on. It has rightly been said as a design that was ahead of its times- and we owe our favorite smoky dishes to this very smoker.

Bringing smokers from commercial applications to home users is something that the Torry Kiln is credited with. Now, we can easily smoke meat and fish the way we want at the comfort of our home and keen BBQ lovers like Grills Forever are making good use of them. It has been simplified largely, and so have the techniques that we use. However, regardless of what advancements may have come into smoking meat, the basic steps that are involved are essentially the same as they were in 1939, when the Torry Kiln first came out.

Replace or Repair? A Comprehensive Guide on Grills

A Beginner’s Guide to Grilling with Ceramic Briquettes

A Beginner’s Guide to Grilling with Ceramic Briquettes